Cat Got Your Tongue? Casting the Spotlight on the Burmese Language 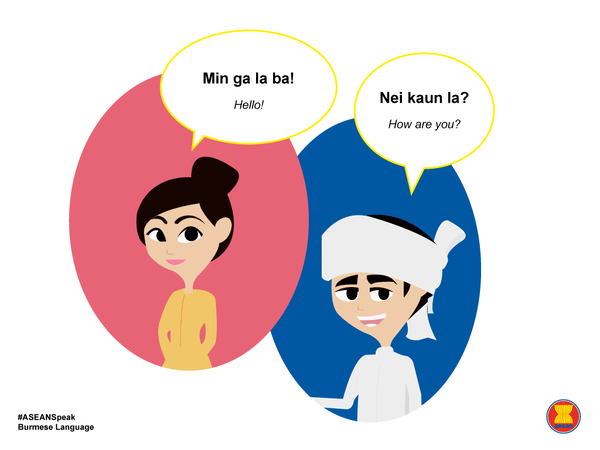 Say the words ‘Burmese’ or ‘Burma’ to someone outside Asia, and most probably they will either tell you about a certain breed of domestic cat, think of an exotic and faraway country from colonial times, or reply without a clue whatsoever. Aside from the feline breed, ‘Burmese’ contains a far more important meaning and significance, and that is being Myanmar’s principal and official language. It is spoken by over 30 million people, or two-thirds of the Southeast Asian country’s population. On the other hand, ‘Burma’ is Myanmar’s former official name from its time under British colonial rule until the name was changed in 1989.

Did that clear up some confusion and stir a dose of interest in you? Enough of the cat puns and let’s get down to business.

Burmese is the mother tongue of the Bamar people. Living primarily in the Irrawaddy River basin, they are the dominant ethnic group in Myanmar. With the Bamar being overwhelming adherents of Theravada Buddhism, the Burmese vocabulary have many terms associated with the said religion. Aside from the majority of Bamar people, the Burmese language is also widely spoken by many of the other ethnic minorities.

Being the official language of Myanmar, Burmese is also used throughout Malaysia, Singapore, Thailand, and is focused within this area of Southeast Asia. In comparison with other languages in this region such as Thai, Burmese has not spread very far internationally. Amidst this, it is still primarily spoken by 32 million people as a first language and an estimated 10 million speakers adopting it as a second language.

While English speakers and most of the locals continue to refer to the language as Burmese, the government also officially recognises it as the Myanmar language, which is duly regulated by the Myanmar Language Commission.

As already stated above, the Burmese language is spoken in a number of countries that had and still share a cultural and historical background. Investing time in learning a little of the language before doing business locally is likely to pay dividends, and if you’re planning to visit these places, being able to speak the tongue will make travel a whole lot easier. With the recent reforms brought about by Myanmar’s shift from military dictatorship to a democratic republic, its tourism is starting to open up. Knowing how to use the language can give you a more immersive experience as a tourist.

So, if you’re up to the challenge of learning this language, here are the attributes that make Burmese so distinctive:

1. The Burmese language is classified into two formal categories. Written Burmese is called ‘mranma ca’, which is considered as a higher class and is used in literature, publications, and official works. Spoken Burmese is called ‘mranma ca ka’, which is colloquial and spoken in day-to-day conversations. Additionally, there are two main dialects: Upper Burmese and Lower Burmese, which differ mostly on vocabulary but neither on accent nor pronunciation.

2. It has its own script. The language is written in its own Burmese alphabet, which was adapted from the Mon script, and which in turn was developed from either the Pallava or Kadamba alphabet of South India in the 5th century. The Burmese script consists of circular and semi-circular letters with special characters and diacritics, and is written from left to right.

3. Burmese is a monosyllabic and tonal language. Monosyllabic means that words in Burmese consist of a single syllable. The Burmese language is also tonal in that the use of different vowel tones together with pitch, phonation, duration, intensity or loudness, and vowel quality are all important factors in distinguishing lexical or grammatical meaning between words.

4. Verbs are more prominent than adjectives. Adjectives barely exist in the Burmese language. In their place, verbs are used by combining them with grammatical particles and with the noun in discussion. Burmese verbs also come abundant with information, and there are a whopping 449 particles in the language. These suffixes are used in conveying different tenses, moods, intentions, honorifics, and the like.

5. It follows the subject-object-verb (SOV) word order. Burmese being an analytic language as well uses the SOV pattern. To illustrate this, the standard English order of ‘I speak Burmese’ will be spoken and written as ‘I Burmese speak’ in the Southeast Asian tongue.

Here are some phrases in Burmese you can use when you go on a trip to Myanmar. You should also take note that the Burmese language puts emphasis on the gender and status of both speaker and audience, which is why there are different versions for men and women.

If you are interested in Burmese translation, please visit our translation services for specialist languages webpage.

See what our clients think about our work.