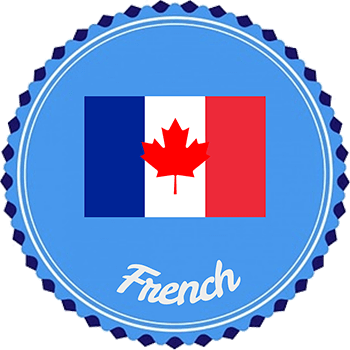 French is one of the most widely spoken Romance languages, also referred to as Latin or Romanic languages. Not least because it evolved from a language originally spoken in Rome, many agree that French is the language of love. Taking its roots from the Latin language it also has some influence from Old Norse language, which is why a lot of French terms have similar English counterparts.

In 1608, the French navigator and explorer Samuel de Champlain founded Quebec City and New France on behalf of the Royal Court of France. Around five decades later, the New France colonies started to develop a culture of their own. After the British defeated the French troops in the Plaine D’Abraham Battle, the colony fell under British rule. The inhabitants, however, kept speaking French and the area evolved as a French pocket within North America.

Quebec, which is where the New France colonies were established, is currently the largest province in Canada with around 8 million people. More than 70% of residents declared French as their mother tongue, while nearly 95% say French is either a native or a second language.

During the early founding years of Quebec and New France, its main settlers came from the French provinces of Normandy, Aunis and Anjou among others. Ironically, this first wave of immigrants did not speak French as we know it now, but rather used Celtic and Germanic tongues. It was not until the settlers from the Parisian region came over that French was introduced to the state.

As part of the colonization program, the French royalty sponsored 800 young French women (called the King’s Daughters) to settle in Quebec, thereby encouraging male immigration and family formation in the area. Almost half of the population came from Paris. This strategy was successful as the Canadians were already natively speaking French towards the end of the 1700s.

The French language first brought to Quebec, also known as the King’s French, was the language spoken by monarchs and royalty. Back in France, this noble dialect shifted to the popular Parisian language, while Québécois French stayed closer to the old French language.

In written form the two dialects look the same, as they follow most of the same rules of grammar and spelling. The distinction comes with idiomatic expressions and in the distinct difference in the spoken accent, with Québécois French having a pleasant, sing-song tone. The vocabulary is also largely the same, although Québécois French retained more of its older terminology and is more exposed to English borrowings.

The different regions of Quebec also have their further distinctions when it comes to the accent and slang. When comparing pronunciation, one will find that Québécois and European French have little to no difference in terms of consonants. There is a variation, however, in the pronunciation of R, in which the flap or trilled version is more preferred in Quebec while the uvular R is more common in France.

Another distinctive feature is in the pronunciation of ‘d’ and ‘t.’ In Québécois French the letters are pronounced as ‘dz’ and ‘ts’ respectively. Pronouncing petit would sound something like ‘p-tsi.’

French from Quebec and from France both have unique terms. Here are a few examples:

Ever had such a headache that you even think your hair can feel the pain? In Quebec, you would want to use the phrase avoir mal aux cheveux which roughly translates to ‘having a hair ache.’

Although written Québécois French shares the same structure and grammatical rules as metropolitan French, it has its own idioms, words, expressions and cultural references. When it comes to marketing a business to the Quebec audience it makes sense to adapt existing French copy or perform a fresh translation of your marketing communications from English into Québécois French.

Failure to distinguish Québécois French from metropolitan French displays a lack of cultural sensitivity and may be perceived as demonstrating inadequate commitment to the region.

Asian Absolute has professional linguists from both France and Canada who can give the right touch to your French communications. Request your free quote for French translations and/or adaptation.
Read our client testimonials to get some insights into the quality of our work.