May the Fourth be with You! Star Wars Languages and their Real-world Inspirations 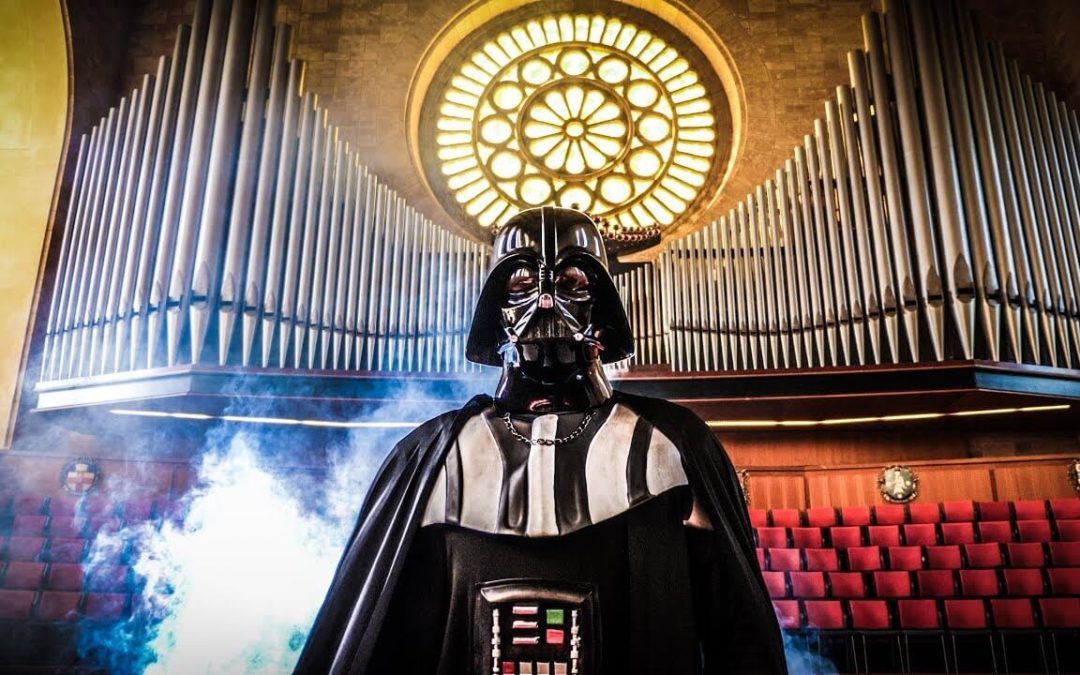 May 4th, unofficially known as Star Wars Day, is celebrated by fans of stories from a galaxy far, far away in numerous places around the world.

For the uninitiated, May 4th was chosen as the fan-created day of celebration of the films and universe first created by George Lucas because of the ease with which the date fits in with the well-known Star Wars catchphrase “may the force be with you.”

Whether you’re a Star Wars fan or not, there are some interesting aspects of this fictional galaxy. In this article, we’ll take a look at how the world of languages intersects with the Star Wars Universe.

May the Fourth be with you!

Are the languages of Star Wars based on real languages?

Constructed languages in works of fiction, such as Elvish from J.R.R. Tolkien’s The Lord of the Rings or Klingon from Gene Roddenberry’s Star Trek, are fully functional languages which can be – and are! – spoken by actual people in the real world. They take an incredible amount of time and effort to create and require expert linguists (with a lot of time on their hands).

The languages spoken in Star Wars, however, are – in the main – based on real-world languages. A sound designer sampled a language and then an actor improvised some lines based on the way it sounded.

In fact, the fame of many Star Wars languages is more often tied to the iconic characters known for speaking them. For example, some of the most popularly asked questions on the topic include:

What language does Jabba the Hutt speak?

Jabba the Hutt is one of the most legendary characters in the Star Wars universe. A crime boss whose loathsome nature is matched his physical appearance as a giant slug with a face, he is the nemesis of everyone’s favourite smuggler and scoundrel, Han Solo.

In the Star Wars films, Jabba speaks Huttese. In the real world, this is based on Larry Ward and Ben Burtt (voice actor and sound designer on the original Star Wars films) listening to Quechua, a language spoken in and around the Andes mountains in South America, and improvising some alien-sounding phrases out of it.

The Quechua people, whose language this is, live in various parts of Peru, Ecuador, Chile, Bolivia, Argentina and Columbia. There are various dialects, the most common of which is Southern Quechua, and Quechua is more accurately a family of languages rather than a single tongue. Quechua languages are spoken by around 10-11 million people worldwide, with only small expat communities elsewhere speaking it outside of its home in the Andes region.

That said, it’s most definitely not a dead language or even particularly obscure. Star Wars fans visiting Peru should keep their ears open. You might just hear someone who sounds a little like Jabba the Hutt or Greedo (the blue Rodian of “Han shot first” fame) walking past.

What language does the co-pilot of the Millennium Falcon speak?

The regular co-pilot of the Millennium Falcon – Han Solo’s iconic heap of junk spaceship – is every fan’s preferred walking carpet, Chewbacca. But as the Wookie language is essentially just roaring (although the story of how Chewbacca got a voice is a very interesting one, involving several bears, a lion and a walrus), we aren’t going to go into too much detail about it here.

The co-pilot we’re referring to in this case is Nien Nunb, the diminutive figure (and puppet) who partners Bobby Dee Williams’ Lando Calrissian in Episode VI: Return of the Jedi. The language spoken by this co-pilot of the Millennium Falcon is Sullustese. But in the real world, much like isiXhosa in the Marvel Black Panther film, Sullustese is a real language. Or several.

The voice actor who portrayed Nien Nunb is Bill Kipsang Rotich. Rotich, who hails from Kenya, spoke a mix of Haya, a language spoken by around 1 million people in the Niger-Congo region, and Kikuyu for his role as Nunb. The Kikuyu people are the largest ethnic group in Kenya and the language is spoken by around 7 million individuals, facts which led to Rotich achieving the status of minor celebrity when he returned home!

What language does Watto speak in The Phantom Menace?

Watto is the small flying blue junk-dealer from Episode I: The Phantom Menace, the Star Wars prequel which probably gets the worst rap of all of the movies. Although the furore over Episode VIII may have given it a run for its money!

The language spoken by the buzzing scrap metal merchant – and by hand-walking pod-racing daredevil Sebulba too – also seems to be Huttese. But in this case, the Star Wars sound team responsible for creating the dialogue took their inspiration from a completely different real-world language: Finnish.

Much like Kikuyu and Quechua, Finnish appears to have been chosen because it has a relatively small population of native speakers. Likewise, it has a sound which might be unusual to many ears, particularly those more used to English. This might be because Finnish contains a higher proportion of vowels by comparison with many other languages.

This may also have been part of the reason why Tolkien used Finnish as his inspiration for one of the dialects of Elvish he created for The Lord of the Rings. Finnish’s use in Star Wars won’t make much sense to a native speaker, however. The most obvious exchange in the film contains actual Finnish words being used in a way which obviously doesn’t fit the context.

For instance, the line where Watto calls “kiitos” at Sebulba is definitely not supposed to mean “thank you”, as it does in Finnish!

What language do Ewoks speak?

Ewoks are the furry little teddy bear-like creatures who had such a large role in The Return of the Jedi. Somehow these guys manage to defeat laser-shooting stormtroopers armed only with some sticks and rocks.

This has been a source of some controversy amongst Star Wars fans since Ewoks first appeared on screens. But perhaps a little more seriously, Ewokese – the language of the Ewoks – actually has a quiet controversy all of it its own…

The language of the Ewoks is based on Tibetan, Nepali and Kalmyk. These are Mongolic languages mainly spoken in East-Central Asia. Again, these languages seem to have been selected because – to the ear of an English-speaker – they sound phonetically unusual; a little alien compared with what an audience might be accustomed to.

The dialogue was created in the same way as the other Star Wars languages: a real-world language was sampled, and then a voice actor or group of voice actors tried to sound it out. This gave them a base to work on, meaning there was no need to go through the incredibly hard work of designing an entire language. This is the sort of project undertaken by linguist David J. Peterson, who developed functional Dothraki and Valyrian tongues for the televised series of George R.R. Martin’s A Game of Thrones.

In theory, this approach might not be too much of a problem. But with a whole section of a Buddhist prayer being clearly understandable in amongst the Ewokese spoken in the film, there’s a certain amount of cultural awareness which is probably called for when developing a language in this way!

What language does Yoda speak?

One of the most beloved – and most heavily memed – characters in the Star Wars franchise is Jedi Master Yoda. This wise old mentor is small and green, lives in a swamp, teaches Luke the ways of the Force and talks in an endearing, roundabout way.

Sentences like “much to learn, you still have” or “anger, fear, aggression; the dark side of the force are they” sound very odd to the English ear. From a storytelling perspective, this is clearly a device simply to make Yoda sound different, intriguing – as if everything he says a deeper subtext or riddle to be solved. The perfect wise old master!

The reason why Yoda does sound a little strange is the construction of his sentences. These do vary, especially from film to film, but his standard sentence goes object-subject-verb. In the real world, this is an incredibly rare order for any language to have. The more common constructions include:

A recent investigation by David Adger, a linguistics professor at Queen Mary University in London, concluded that the real language most like that spoken by Yoda is Hawaiian. But Hawaiian uses the verb-subject-object construction mentioned above. The object-subject-verb construction can only really be found in a very few South American Indian languages. Which is possibly why the language Yoda speaks sounds so alien to pretty much any ear.

But in the Star Wars Universe in particular, and fantasy in general, it’s often best when some things remain a mystery.

Do you have any pearls of wisdom to share from a long time ago in a galaxy far, far away? Or are you a speaker of or an expert in any of the real-world languages mentioned here?

Join the discussion below and let us know!