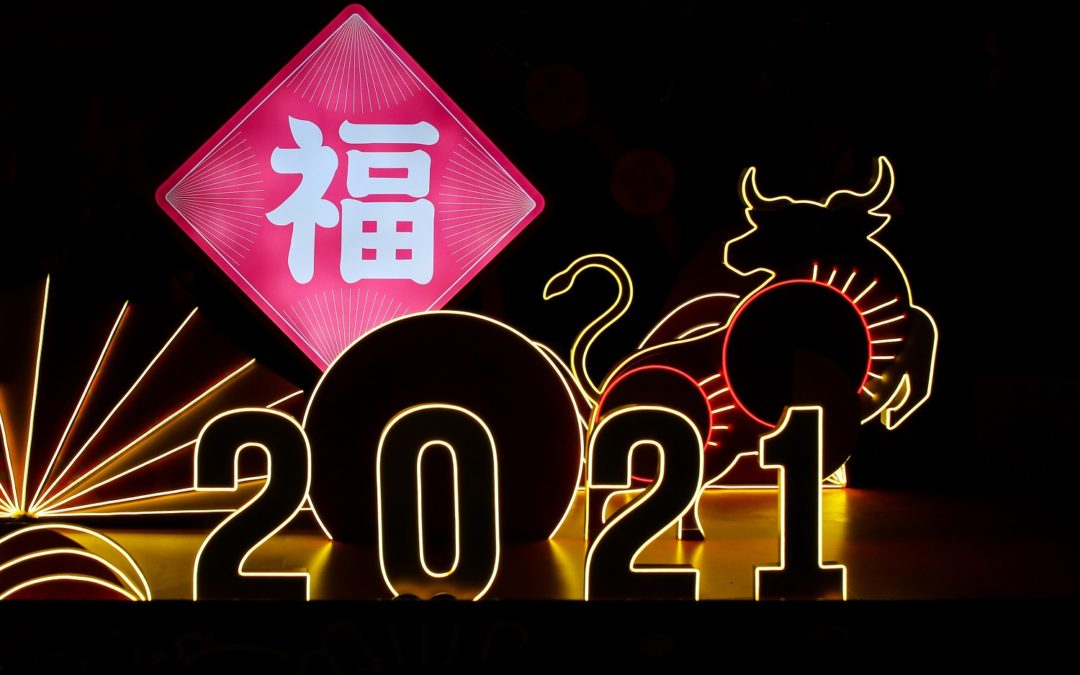 If you’re reading this on or after the 12th February 2021, Happy Lunar New Year! Chinese New Year (often called the Spring Festival) falls in mid-February this year. It marks the turning of the Year of the Rat into the Year of the Ox.

2020, the Year of the Rat, was supposed to be one of opportunities. Perhaps it was if the effects of the coronavirus in your part of the world opened some up for you.

This year, 2021, the Year of the Ox is supposed to signify a lucky year. One where hard work will be richly rewarded.

But what does a “Year of the Ox” mean? What does it signify? And what will happen during this Spring Festival – traditionally a time when one travels to visit one’s relations – in a year when many of us are facing restrictions on our movements?

How does the Chinese New Year work?

The Chinese calendar is a lunar one. It starts with the appearance of the first new moon every year between the 21st of January and the 20th of February.

In 2021, this will happen on the 12th of February. But the Spring Festival itself is a 15-day affair. It starts with the Lantern Festival – a night-time festival filled with, you guessed it, lanterns – on the 6th of February this year, and finishes 15 days later.

Because the festival is based around the cycles of the moon, its dates change each year. It has been celebrated in much the same way for over 5000 years.

Traditionally, the Chinese Lunar Year is celebrated in the company of family on New Year’s Day and New Year’s Eve. In the past, and still today for many, it means religious events within the household.

Making offerings to the family’s ancestors is common, as it is generally held that they deserve gratitude and respect for the current and future status and happiness of the family. Even in relatively secular families, both living and dead generations of the family are usually held to be one cohesive whole.

Tuan Nian or Wei Lu, the “Reunion Dinner” or “gathering around the stove”, is another major feature of the festival. All of the family travel – often for great distances – in order to be together for a big meal on New Year’s Eve.

Many types of food served during this dinner are “foods with meaning”. This is a traditional list of dishes which are clever puns or homonyms wishing those gathered things like good fortune or wealth for the coming year. Others symbolise hoped-for concepts, such as the completeness of the family (a traditional dish for this is a chicken with its head still attached).

It is generally thought that this kind of gift-giving will bring good fortune to both the giver and receiver.

The cycle of the Chinese zodiac

The Chinese zodiac repeats in cycles of 12 years. Each year has its own animal sign. In order, these are Rat, Ox, Tiger, Rabbit, Dragon, Snake, Horse, Goat, Monkey, Rooster, Dog, and Pig.

Every time the cycle is repeated, it also cycles through one of the five elements of the Chinese zodiac – Wood, Water, Metal, Earth, and Fire.

These two cycles combine into one larger cycle which repeats itself once every sixty years (twelve multiplied by five).

Depending on the qualities of the Chinese zodiac animal associated with the year in which you were born, it is sometimes held that you will come to possess certain characteristics.

Year of the Ox years – were you born in one?

Following the 60-year cycle of the Chinese zodiac, Years of the Ox are associated with one of each of the five elements in a sixty-year repeating cycle.

This means you can pick out your birth year and see what qualities and characteristics are sometimes associated with those born in that particular Year of the Ox:

Where is Chinese New Year celebrated?

Although it is often referred to colloquially as “Chinese New Year”, the Spring Festival or Lunar New Year is actually celebrated across many parts of the world.

You will find people celebrating the turn of the lunar year in one way or another in places including Singapore, Thailand, Taiwan, Hong Kong, Cambodia, Indonesia and Malaysia, as well as Mauritius, Australia and New Zealand, and other places with large Chinese communities such as Europe, the US, and Canada.

The Ox in astrology and beliefs around the world

Nor is the Chinese Zodiac the only place you will find the Ox represented as an image with certain – almost always positive – qualities attached.

The Ox in Korea

In Korea, the ox is a popular feature of proverbs and fables. For example, the Korean phrase which roughly means “A bad ploughman quarrels with his ox” is said in much the same way as the phrase “A bad workman blames his tools” in many parts of the English-speaking world.

The Ox in Japan

Symbolism related to the ox is also widespread in Japan. Some argue that this is due to its cultural importance in China and Korea, seeing general cultural osmosis as responsible for the ox’s presence in Japanese belief.

Yet the ox is also heavily featured in Japanese Buddhism. You will see the ox mentioned in written texts, religious statues, and in other imagery and events. The ox in Japanese Buddhism is sometimes said to represent the fundamental enlightenment-capable nature of all beings, while the ox herder is a person trying to “herd” their nature onto a particular path.

In Japanese Shinto, oxen and cows are also sometimes thought of as messengers of Tenjin, the patron kami (a holy power or spirit) of learning and scholarship. Tenjin is the post-apotheosis name of the famous Heian-era poet and politician Sugawara no Michizane

This belief has led to the creation of a large number – some estimate around 14 000 – Tenman-gu shrines across Japan. This includes the famous Dazaifu Tenman-gu in Fukuoka, sited on Michizane’s final resting place.

These shrines feature a statue of an ox and remain a popular place for students to visit in preparation for exams. Some shrines – most famously Hirakawa Tenman-gu, close to the Imperial Palace – feature a cow statue (sometimes called nade-ushi, or rubbing cows) due to the traditional belief that cows can cure illnesses, and are touched for healing by thousands of visitors each year.

How will the Lunar New Year be celebrated in 2021?

The Lunar New Year Festival of 2021 brings to a close a year which has been a tough one for may people. This is especially true in parts of China which have struggled through being the place where the COVID-19 pandemic first began.

Usually, the Spring Festival is a time in which Chinese people will make a serious effort to come together with their family. In fact, this period – Spring Festival travel time, known as Chunyun – is often characterised as the “largest human migration on Earth”.

Millions of people travel globally to be with family during the festival. Some estimate that around 3 billion individual trips are made within China during this period.

Sadly, in 2020, it has been suggested that Chunyun led to COVID-19 being widely spread. Restrictions were in place which saw this figure reduced by around 50%. But 1.5 billion trips is still a lot of potential contact!

For 2021, the Chinese government has had little choice but to put even stricter measures in place:

Rewarding those who choose not to travel for Spring Festival

In general, it looks like the 2021 Spring Festival may be the first time that many Chinese people may have to go without visiting family.

To compensate in a small way, some cities and employers are giving out so-called “Red Packets” to reward people who have decided to stay local rather than travel home for the holiday.

The government and health authorities are encouraging others to follow their example, suggesting that it might be nice for workers who stay to get things like free food, tickets for a local tour or exhibition, or extra privileges which are usually the preserve of those born locally.

What does Year of the Ox mean?

The Ox is generally thought to be a beneficial animal in the Chinese Zodiac. This is because oxen are hard-working and play a critical role in agricultural societies, being part of the harvest and being widely associated with fertility.

This hard-working, useful nature is extended to those whose Chinese Zodiac birth year (sometimes written as Ben Ming Nian) is a Year of the Ox. Oxen are broadly said to be kind, honest, and logical in addition to being calm, patient, and strong-willed – if a little stuck in their own opinions and ways.

The fact that 2021 is a Year of the Metal Ox also implies, according to those who study the Chinese Zodiac, that success will only come to people who work extremely hard for it this year.

It was once traditional in some parts of China to make an Ox statue out of mud and beat it with sticks to celebrate the start of spring. This might be the origin or related to the fact that the Ox is regarded as a positive influence in Feng Shui, and sometimes seen as a granter of wishes.

Let’s hope that the 2021 Year of the Ox will grant us all the wish of a happy and more prosperous year than the last. Gong xi fa cai!

Happy Lunar New Year 2021! Ready to start the hard work of the Year of the Metal Ox?

Let’s talk about your upcoming translation or interpreting project.

The Lunar Festival is Asian Absolute‘s busiest time of year. But we are still delivering all of our usual excellence in localisation with only a small change to our delivery times.