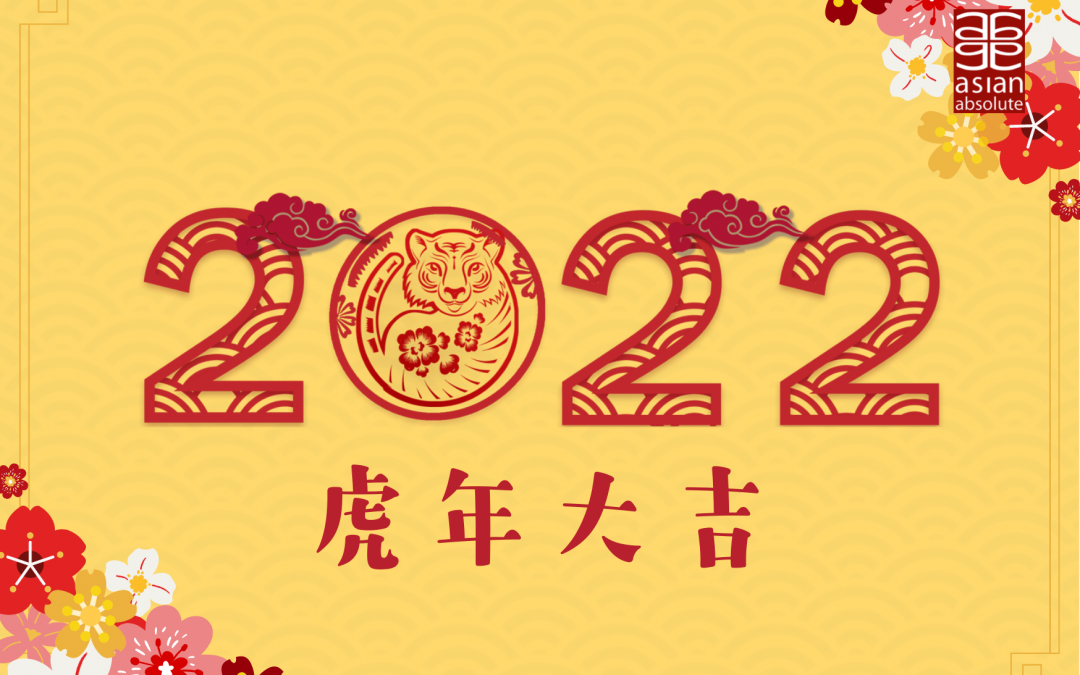 It’s that special time of the year again! Chinese New Year – also known as the Spring Festival – is about to be celebrated in China, as well as across large parts of Asia and by communities around the world.

In 2022, the Year of the Tiger, Chinese New Year falls on 1st of February. This means that from Chinese New Year’s Eve (on the 31st of January this year) to the concluding Lantern Festival on February 15th, some serious celebrations are going to be happening.

Even if you just count China, the Spring Festival marks the largest migration of people on the planet every year. This year, it’s expected that around 400 million people will travel back to their parents’ homes to spend this important time with their closest family.

So what makes this festival such a big deal? What traditions mark Chinese New Year? What does a Year of the Tiger really mean?

Read on and you’ll find out everything you need to know.

Unlike New Year in the Gregorian calendar that most of the world follows, Chinese New Year takes place on a different date every year.

That date always lies between the 21st of January and the 20th of February and depends on the cycles of the moon and sun as marked by the Chinese Lunar Calendar.

The date of Chinese New Year in 2022 is the 1st February.

What are Chinese New Year traditions?

Like the whole Christmas period in other parts of the world, Chinese New Year has a huge stock of traditions and rituals that often start around a month before the official New Years Day.

Celebrations officially last for fifteen days – a period known as Chunyun – and most people will get at least a week of holidays from their employer in order to enjoy them. Most businesses will then reopen around five or so days into the next year.

One of the main traditions is spring cleaning. Especially in rural and more traditional homes, families will start cleaning their houses as early as three weeks before the Lunar New Year. But most people will have a good old clean starting at least a few days before the big day.

The idea is to sweep away the accumulated bad luck of the last year. During this time, doors and windows may also be repainted (often in red) for even better luck. Most people will also be out buying presents, food and clothing ready for the festival.

Customary because of a traditional story involving a monster called Nian being fended off using firecrackers, fireworks are an omnipresent part of Chinese New Year’s Eve celebrations. In fact, they’re set off in such huge quantities every year that hundreds of cities across the country have banned their use or put restrictions on them for safety reasons.

More reservedly, you will see many people take the time to visit the graves of past family members and do things like “let the ancestors eat first” by providing sacrifices of food and extra glasses of drink at the table.

It’s not uncommon for images of “door gods” to be erected in the form of posters (protecting the front doors of homes from bad luck or spirits). You will also see a lot of red everywhere – red is associated with luck in Chinese symbolic tradition – especially in decorations and clothing.

Most families try to get together for a traditionally ten-course meal, for which there is a long, exciting menu of traditional dishes with symbolic meanings that people choose to cook.

After dinner, most families will play games together or watch festival-themed TV shows like the Spring Festival Gala (collectively watched by over 1 billion people every year), at least until the fireworks start.

Perhaps the major tradition of Chinese New Year is Hong Bao, or Red Packet. This is a kind of monetary gift-giving, always from married couples or children and unmarried adults.

The gifts themselves are traditionally red envelopes packed with cash. Though these days, thousands of people give e-hongbao – online presents via platforms like China’s hugely popular WeChat.

There is also more eating to be done. Again, many traditional foods being served during Lunar New Year have symbolic meanings – usually to encourage luck or prosperity.

There is also a custom of visiting local friends and neighbours to keep in touch and also to forgive disagreements that have arisen over the past year.

Is Chinese New Year celebrated in other countries?

The Spring Festival is celebrated across many parts of Asia and far beyond too. Pretty much anywhere you find Chinese diaspora communities or “Chinatowns”, you will find people celebrating the Lunar New Year (and probably a whole lot more people with no real link to the festival getting in on the fun too)!

All in all, around 20% of the global population (nearly 2 billion people altogether, 1.4 billion of them in China) will celebrate Chinese New Year around the world in 2022.

These celebrations will share much of the same characteristics as those in China, often with added big parades and Lion dances both for luck and for the crowds. Other cities will see large numbers of fireworks or light up landmarks in red to mark the start of this Year of the Tiger.

How the Chinese zodiac works

According to the Chinese calendar, 2022 is the Year of the Tiger.

For the past 2000 years and more, each year in the Chinese Lunar Calendar has been associated with a particular animal. People born in the corresponding year are often thought to embody certain characteristics associated with that animal.

There are twelve signs in the Chinese zodiac. Each sign is named after one of twelve animals: Rat, Ox, Tiger, Rabbit, Dragon, Snake, Horse, Goat, Monkey, Rooster, Dog, and Pig. Each of these animals has its own qualities, strengths and weaknesses associated with it.

This cycle repeats every twelve years. But within that cycle, the system of Heavenly Stems and Earthly Branches means that one of the five classical elements (Metal, Water, Wood, Fire and Earth) is also assigned to each animal in a rotating sequence.

Thus, each year’s animal sign also has an element attached. This means you might be born in a year of the Earth Tiger or (the rather cool sounding) Fire Tiger. The combination of these two cycles creates a greater cycle that repeats every sixty years.

Years of the Tiger

This means that, according to the Chinese zodiac, 2022 is the Year of the Tiger. It is also the Year of the Water Tiger. For people who follow the zodiac and its lessons, this means certain things:

People born in the Year of the Tiger are traditionally understood to share something of the predator’s qualities.

They are often said to be brave, daring and self-confident with lots of energy and enthusiasm. They are also thought to strive for justice and work for the greater good while always remaining cheerful.

2) Tigers also have some negative qualities

On the flip side – and all Chinese zodiac animals are said to have a mixture of qualities, it’s part of the charm of the system – those born in a Year of the Tiger are sometimes a little thoughtless, brash, or heavy-handed in the way they go through life.

They are also strongly desirous of having their own personal space and can rebel against authority with undeserved confidence when they believe they are right.

3) Tigers can be said to be defined by their ambition

Tigers are often said to be ambitious. For some, this may be an ambition to achieve an ideal equally as well as it might be to achieve some goal in the workplace or to “achieve” great wealth.

This dedication to their goals means that other parts of a Tigers’ life can suffer. They can also become a little overbearing by comparison and in company with those born under other Chinese zodiac signs.

Taken as a whole, people born in the Year of the Tiger might find themselves a natural fit for the worlds of business and anywhere else there is a great deal of competition, such as on the sports field.

4) Tigers can be lucky and unlucky in love

When it comes to romance, Tigers are often said to be great but potentially overenthusiastic partners who can make their partner feel as if they struggle to commit with the same degree of passion.

Tigers may also again come to demonstrate that potentially overconfident part of their nature and try to control relationships to their detriment.

The Five Elements and the Year of the Water Tiger

Keeping things even more interesting, those general characteristics that are thought to mark those born in a Year of the Tiger change in different ways depending on the associated element.

For those born in 2022 (and 1962), this element is Water. It’s commonly said that those born in a given Year of the Tiger may have lots of acquaintances but few true friends. It’s thought that Water Tigers tend to be better at this, forming closer relationships.

While they can have the classic Tiger heavy-handed brashness and display this aspect to the world, Water Tigers are thought more likely to have an interior life that is much more indecisive.

It may take them some work to balance the two sides of their personality if they are to achieve the ambition (which, as traditional Tigers, they definitely want to achieve) alongside maintaining a happy family life and friendships.

That’s enough about the Tiger. How will those born under other signs fare in 2022?

For many, it’s going to be a good year. If you were born in a Year of the Ox or Goat, you’re thought to be in for a particularly prosperous one. While those born in years of the Rabbit, Dragon, Horse, and Rooster are also going to be pretty blessed.

If you’re born in one of the other years though – Rat, Snake, Monkey, Dog, or Pig – or in a previous Year of the Tiger, this year is going to be more of a challenge than most. Good luck!

From all of us on the Asian Absolute team, Xin nian kuai le! Or if you’re in a Cantonese-speaking part of the world and celebrating Chinese New Year, Gong hei fat choy!

Chinese New Year is a time for family, saying goodbye to and sweeping away the bad luck of last year, and getting ready to start the new year with good luck, good food, and the road to prosperity in front of us.

Getting back to business in 2022? Reaching out to new markets in China – or from a Chinese-speaking part of the world to other regions?

Let’s talk. Asian Absolute helps organisations around the world – including major brands like Coca Cola, Ikea, Hewlett Packard, and many others – communicate across language barriers.

Contact us today. Get a free, no-obligation quote on or more information about how to get the best from your next multilingual project.